While a Greimasian approach to narrative environments emphasises actantiality, as a complex field of inter-related, systemic or networked inter-actions involving actants of many different kinds, from conventional characters to various kinds of artefactual entities such as climate and religious symbolism, there still remains the problem of what might ‘animate’, ‘drive’ or ‘give impulsion’ to this field of interaction.

One approach to understanding some of the human motivations implicated in such fields of inter-action that is potentially compatible with Greimas’s actantial model, with its structured oppositions and dynamic relational axes, is the agonistic politics of Chantal Mouffe, which gives priority to the notions of antagonism, agonism and hegemony (i.e. hierarchical power relations achieved through apparent consensual agreement).

The weakness of Mouffe’s position from the perspective of narrative environment design, as a political arrangement of some kind, is a lack of attention to the affective dimension of affiliation, a dimension to which she often alludes but does not develop; and to the spatial dimension, which she mentions but fails to engage at all [1].

Mouffe’s approach to “thinking the world politically” is outlined below. 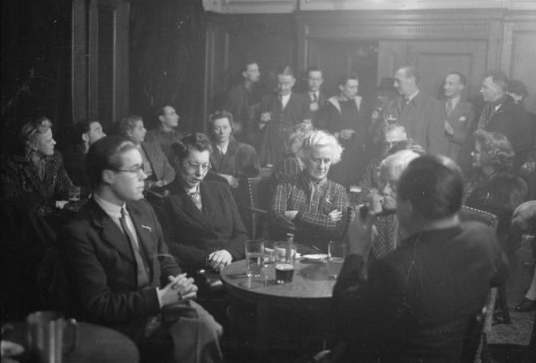 In Hegemony and Socialist Strategy, Ernesto Laclau and Chantal Mouffe argue that the concepts of antagonism and hegemony are essential to an understanding of the political. Both concepts point to the importance of the radical negativity that is manifested in the ever-present possibility of antagonism. This dimension of radical negativity forecloses the possibility of a society beyond division and power (Mouffe, 2013: 1)

In subsequent books, Mouffe has developed her reflections on the political, making a distinction between ‘the political’ and ‘politics’. In Mouffe’s account, ’the political’ refers to the dimension of antagonism that can take many forms and can emerge in different social relations. ‘Politics’, she takes to refer to the ensemble of practices, discourses and institutions that seek to establish a particular order and to organise human co-existence in conditions which are always potentially conflicting, because they are affected by the dimension of ‘the political’.

Political questions are not susceptible to technical solutions by experts, Mouffe contends, because they require decisions that make a choice between conflicting alternatives, i.e. they are inescapable moments of decision that require having to decide within an undecidable terrain. In this context, Mouffe points to the inadequacy of liberal thought which, because emphasising (technical) rationality and (methodological) individualism, cannot grasp the pluralistic character of the social world.

Liberal thought’s (methodological) individualism means that it is also blind to the formation of collective identities. This is a major shortcoming as the political, Mouffe argues, is concerned with forms of identification from the outset; the political unfolds through the relational formation of ‘us’ as distinct from, if not always opposed to, ‘them’. Politics always deals with collective identities, i.e. the constitution of a ‘we’ which requires, as its very condition of possibility, the demarcation of a ‘they’.

As already noted, such us/them and we/they relations need not necessarily be antagonistic. They may concern questions of recognising differences. Nevertheless, there is always the possibility that and us/them, we/they relation might become a friend/enemy relation. This transformation occurs when differences begin to be perceived as threats to ‘our’ collective identity, to our existence as a collective body. Henceforth, any us/them relation becomes a locus of antagonism. Mouffe concludes that the condition of possibility of the formation of political, collective identities is simultaneously the condition of impossibility of a society from which antagonism can be eliminated.

Mouffe argues that her agonistic model provides an alternative to the two main approaches in democratic political theory: the aggregative model, which conceives of political actors as being moved by the pursuit of their interests; and the deliberative model, which emphasises the role of reason and moral considerations. Both of these models fail to register the centrality of collective identities; and the crucial role played by affects in their constitution. Mouffe suggests that it is impossible to understand democratic politics without acknowledging ‘passions’ as a driving force in the political field.

One of the main challenges for pluralist liberal democratic politics is how to defuse the potential antagonism that exists in human, social relations. The crucial issue is how to establish the us/them distinction, constitutive of politics, in a way that is compatible with the recognition of pluralism. What is important for libel democratic politics is that conflict does not assume the form of an antagonism, i.e. a life-and-death struggle between enemies, but that of agonism, i.e. a discursive, dialectical contest between adversaries.

The adversary, for Mouffe, is the opponent with whom a common allegiance to the democratic principles of liberty and equality for all is shared, while nevertheless disagreeing about their interpretation. The confrontation between adversaries constitutes the agnostic struggle which is the condition of a vibrant democracy.

While consensus, while viable, is necessary, it nevertheless must be accompanied by dissent, Mouffe states. According to Mouffe’s understanding, of ‘adversary’, antagonism is not eliminated but rather sublimated. In agonistic politics, the antagonistic dimension is always present, since what is at stake is the struggle between opposing hegemonic projects which cannot be reconciled rationally (i.e. according to a technical rationality). The prime task of democratic politics is to ‘sublimate’ passions by mobilising them towards democratic designs, by creating collective forms of identification around democratic objectives.

For Mouffe, the shortcomings of Hannah Arendt’s conception of agonism is that it is without an accompanying antagonism. Whiel Arendt places great emphasis on human plurality and insists that politics deals with the community and the reciprocity among human beings who differ from one another, she does not acknowledge that this plurality underlies antagonistic conflicts. To think politically, for Arendt, is to develop the ability to see things from a multiplicity of perspectives. Arendt’s pluralism, Mouffe contends, is not fundamentally different from that of Jurgen Habermas. Arendt seeks in Kant’s doctrine of aesthetic judgement a procedure for ascertaining intersubjective agreement in the public sphere. Thus, Arendt ends up, Like habermas, envisioning the public sphere as a space where consensus (without reserve, so to speak) can be reached.

Nevertheless, there are differences between Arendt and Habermas concerning that consensus. For Habermas, consensus emerges through an exchange of arguments constrained by logical rules; while for Arendt agreement is produced through persuasion, not irrefutable proofs. Neither Arendt nor Habermas acknowledges the hegemonic form of consensus and the ineradicability of antagonism, a moment that Lyotard calls the differend:

“As distinguished from a litigation, a differend would be a case of conflict, between (at least) two parties, that cannot be equitably resolved for lack of a rule of judgment applicable to both arguments.” (Lyotard, 1988: xi)

Mouffe also takes issue with the conception of agonism proposed by Bonnie Honig, whose view is inspired by Arendt. The core of the perspective on politics advocated by Machiavelli, Nietzsche and Arendt, which Honig calls virtu, is the agonistic contest through which citizens are encouraged to keep policies and ideas open to discussion and to challenge any attempts to end debate. Mouffe, while agreeing with the importance of contest, does not think that the character of agonistic struggle can be envisaged solely in terms of an ongoing contestation over issues or identities. She suggests that the crucial role go hegemonic articulations also needs to be grasped, as does the necessity of challenging what exists and of constructing new articulations and new institutions.

The weakness of Honig’s approach, Mouffe proposes, can be seen in her exposition of feminist politics, which conceives the public space of politics as a verbal game of disputation, where the central question is not what we should do but who we are. For Mouffe, this is not sufficient to envisage an adequate form of feminist politics. The agonistic struggle should not be centred on the deconstruction of who one is and the proliferation of identities at the cost of addressing the question of what we, as citizens, should do. In Mouffe’s opinion, Honig, like Arendt, places to great an emphasis on the aspect of freedom understood as action in the context of speech acts and the presentation of the self, while not taking seriously enough the issue of justice, of what is to be done.

Mouffe finds similar limitations in the conception of agonism put forward by William Connolly, who attempts to make the Nietzschean conception of the agon compatible with democratic politics. Central to Connolly’s vision is the notion of agonistic respect, which represents for him the cardinal virtue of deep pluralism, the most important political virtue in the contemporary pluralistic world. The question that Mouffe poses for Connolly’s theory is whether all antagonisms can be transformed into agonisms and all positions accepted as legitimate and accommodated within the agonistic struggle; or are there demands that have to be excluded because they cannot be part of the conflictual consensus that provides the symbolic space in which the opponents recognise themselves as legitimate adversaries? Connolly seems to suggest that there can be a pluralism without antagonism, whereas Mouffe argues that a more adequate political approach requires dealing with the limits of pluralism.

Mouffe summarises her critique of theories of agonism influenced by Nietzsche and Arendt by noting that their main focus is on the fight against closure which means that they are unable to grasp the nature of the hegemonic struggle. The incapacity of these theories to account for the necessary moment of closure that is constitutive of the political is the consequence of an approach that envisages pluralism as a valorisation of multiplicity, eliding the constitutive role of conflict and antagonism.

All of the approaches discussed by Mouffe (2013) acknowledge that under modern democratic conditions, the people cannot be envisaged as ‘one’. However, the Nietzschean-Arendtian approach sees the people as multiple whereas, in Mouffe, the people appears as divided.

Mouffe concludes that it is only when division (exclusion) and antagonism (irresolvable conflict) are recognised as being ineradicable that it is possible to think politically.

[1] In this respect, it is worth examining Mouffe’s (2012) book chapter “Space, hegemony and radical critique”, where she asserts that the work of Doreen Massey had made her aware of the importance of the spatial dimension in politics. Apart from noting Massey’s insistence on space as a dimension of multiplicity, on space being the product of relations and practices and on the need to acknowledge that our co-constitutive inter-relatedness implies spatiality, Mouffe fails to engage with Massey’s work.