Device to root out evil 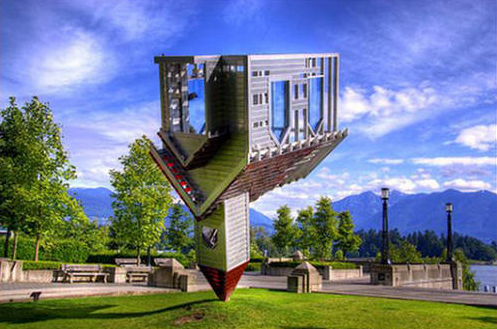 This piece of artwork by American sculptor Dennis Oppenheim, entitled Device to Root Out Evil, now stands as an upside-down church in Glenbrow, Canada. It was formerly displayed in Vancouver, but controversy over it blocking the ocean view because of where it stood caused it to be moved.

Oppenheim maintains that his interest is in exploring the dialogue between architecture and sculpture. From the perspective of narrative environments, Device to Root Out Evil, as well as highlighting the distinction between architecture and scuplture, combines architecture with narrativity or discursivity. Furthermore, much like Erwin Wurm’s “House Attack” in Vienna, Device to Root Out Evil juxtaposes the familiar with the unexpected within a mundane or everyday setting

Oppenheim argues that turning the church upside down makes it more aggressive but not, in his opinion, blasphemous. Given its title, this is very much up for debate.