Theatrical devices may be of great value when considering how to design your narrative environment. In this context, it is well worth looking at the aims and techniques of Brecht’s ‘epic theatre’.

The Aristotelian model of tragic theatre remains a strong influence over dramatic construction in Western theatrical traditions. It is a model with which Bertolt Brecht takes issue [1]. The questions that Brecht poses for tragic theatre are important for narrative environment design because he makes explicit an emphasis on how drama can provoke critical thinking in the audience rather than simply please the audience; he re-thinks the role of emotional responses and intellectual responses to dramas, and questions the role of ‘empathy’, all of which are important concerns for narrative environments; and he raises the issue of the social and historical contextualisation of human suffering, rather than assuming its inevitable and universal character. 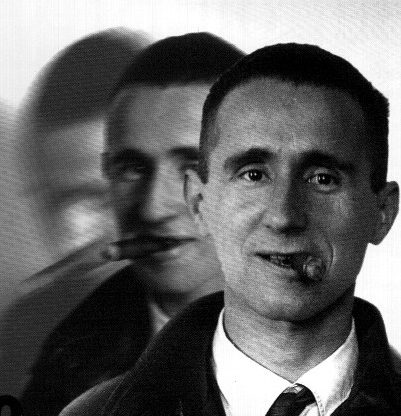 Brecht argues that Aristotelian dramatic practices lead the audience to conclude that human suffering is an inescapable or inevitable part of the human condition. He proposes, in its stead, ‘epic theatre’, although towards the end of his career he came to prefer the name ‘dialectical theatre’ to describe the kind of theatre that he had developed earlier in his career. Epic or dialectical theatre presents human suffering as something that can be changed through the social transformation of political institutions. This is the first major distinction that Brecht makes between tragic or Aristotelian theatre and epic theatre.

The second distinction Brecht makes is to question the audience’s identification with the drama’s protagonist, as the basis from which the audience then takes on the protagonist’s emotional states. Thus, Brecht’s epic theatre, through its staging practices, seeks to put into question the empathic and sympathic relations between protagonist and audience, so that the audience neither feels with the character nor feels for the character. For Brecht, such empathic and sympathic responses or shared feelings prevent critical reflection on the social dimension of tragedy.

In order to block empathic and sympathic responses, Brecht’s epic theatre employed alienation effects, Verfremdungseffekt, so that a critical mode of engagement with the protagonist and his or her predicament is encouraged. Brechtian performance techniques also sought to prevent the actor from engaging empthically with the character that he or she is playing [2].

In Brecht’s characterisation, Aristotelian drama creates a central protagonist whose thoughts and feelings serve as the focal point and guide the action of the drama, although it has to be said that nowhere does Aristotle claim to have as an aim an exact congruence of feelings between the tragic protagonist and the audience.

Brecht’s objections to the Aristotelian model are summarised as follows by Curran (2001: 172). First, plots that represent the protagonist’s error as central to his or her misfortune do not permit the playwright to write a play that is socially critical. The focus is solely on the representation of misfortune arising from individual error, rather than the fault-lines in the social and political structure that makes for needless misfortune. Brecht contends that to facilitate a critical perspective on the social relations presented in the drama, the drama should go beyond revealing the thoughts and feelings of the protagonist to consider the larger social network in which the protagonist operates.

Second, dramatic practices that feature empathy along with some kind of affinity with the tragic protagonist and a shared feeling as a result of this connection, impede the adoption of a critical perspective on the social dimension of the character’s situation, by not enabling the audience to move from the individual perspective to the social perspective.

Third, Aristotelian tragic theatre uses a mode of engagement that gives the audience pleasure but does not provide instruction or genuine learning.

However, nothing in Aristotelian aesthetic practices is inconsistent with going beyond the dramatic focus on immediate familial relationships and loss to reflect on the wider social dimension of the drama. Nevertheless, the practices of Aristotelian drama do not support this kind of critical reflection in the audience without being supplemented by dramatic devices that prompt this sort of wider consideration of the play’s significance.

Brecht understood that effective drama can never instruct by forcing specific conclusions on the audience, and he recognised that critical engagement is something that playwrights can encourage or enable through the use of techniques that challenge the audience to rethink the basic assumptions he or she uses to make sense of the drama.

Thus, if the aim is to see how tragedy can function as a social criticism, the practices of the Aristotelian aesthetic framework need to be supplemented by Brecht’s recommendations, i.e. those useful dramatic devices that can reveal the relationship between the individual protagonist and the social environment in which he or she acts.

[1] Martin Esslin (1984) points out that, rather than Aristotle directly, it was Goethe’s and Schiller’s 1797 essay, “On Epic and Dramatic Poetry” (Schiller and Goethe, 2001, 1797) that was Brecht’s target. It was because he knew that Goethe and Schiller had based their theory on Aristotle’s Poetics, that Brecht called what he was critical of Aristotelian theatre_._ Through a critique of Goethe and Schiller, Brecht sought to overturn the Aristotelian concept of drama, the drama of catharsis by terror and pity, the drama of spectator identification with the actors, the drama of illusion, which tries to create magical effects by conjuring up events which are represented as totally present, while palpably they are not.

It was against this Goethean and Schillerian formulation of the theory that Brecht offered his counter-theory. Esslin summarises Goethe and Schiller’s position in the following terms:

“Goethe and Schiller said that the epic poet presents the event as totally past, while the dramatic poet presents it as totally present. The epic poet relates what has happened in calm contemplation. The actor, on the other hand, is in exactly the opposite position: he represents himself as a definite individual; he wants the spectators to participate in his action, to feel the sufferings of his soul and of his body with him, share his embarrassments and forget their own personalities for the sake of his. The spectator must not be allowed to rise to thoughtful contemplation; he must passionately follow the action; his imagination is completely silenced.”

In this way, the study of (abstract, universal) human nature is replaced by a study of (concrete, particular) human, social relations.

[2] At the time when Brecht was developing his concept of epic theatre, melodrama, realism and naturalism were popular as forms of theatre. In one very obvious respect, Brecht’s epic theatre was a reaction against the naturalistic approach pioneered by Constantin Stanislavski. Like Stanislavski, Brecht disliked the shallow spectacle, manipulative plots, and heightened emotion of melodrama. However, where Stanislavski attempted to engender real human behaviour in acting through his system and to absorb the audience completely in the fictional world of the play, Brecht thought that Stanislavski’s methodology merely produced escapism. Brecht’s social and political focus led him to distinguish his approach from that of surrealism and also the Theatre of Cruelty developed in the writings and dramaturgy of Antonin Artaud, who sought to affect audiences viscerally, psychologically, physically, and irrationally (Escenastur, 2011).